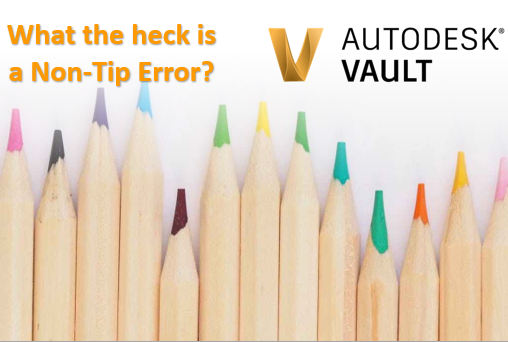 The “Sync properties not allowed on non-tip versions” error message in Autodesk Vault has been known to cause a bit of a panic with Vault Administrators, as it sounds very serious and re-submitting the failed job does not resolve it.

So what does “Sync properties not allowed on non-tip versions” mean?

Basically, the job processor has tried to sync a file which has already been synced, and this has caused the error.

As an example, the Job queue has a listing to update a file’s properties (version x). When the job processor gets to the job, that file is not at the same version (now version y). Because of the mismatch in version, the job processor fails and the job queue displays the dreaded “Non- tip” error.

What Causes the “Sync properties not allowed on non-tip versions” error?

The most common cause is a file being cycled through more than one lifecycle, with a transition that requires a property sync, before the job processor has had a chance to sync it.

This can also happen if a file has transitioned through a lifecycle, with a sync property pending in the job queue, followed by a user doing a manual sync. The original sync is still in the queue, but the file has already been synchronised. This scenario would return the “Non- tip” error.

Have a look at your lifecycle transitions and determine when file properties actually need to be synchronised. With the above in mind, your transition needs to allow enough time for the job processor to run before the next update is required.

A properly set up Vault should (under normal working conditions) have very few “Non-tip” errors.

For the most part these errors can be deleted. But if you are seeing a large volume of them after you have cleared your queue, it may be time to ask your reseller for some help to resolve them.

Have a look at this handy Autodesk article about the “Non-tip” error.